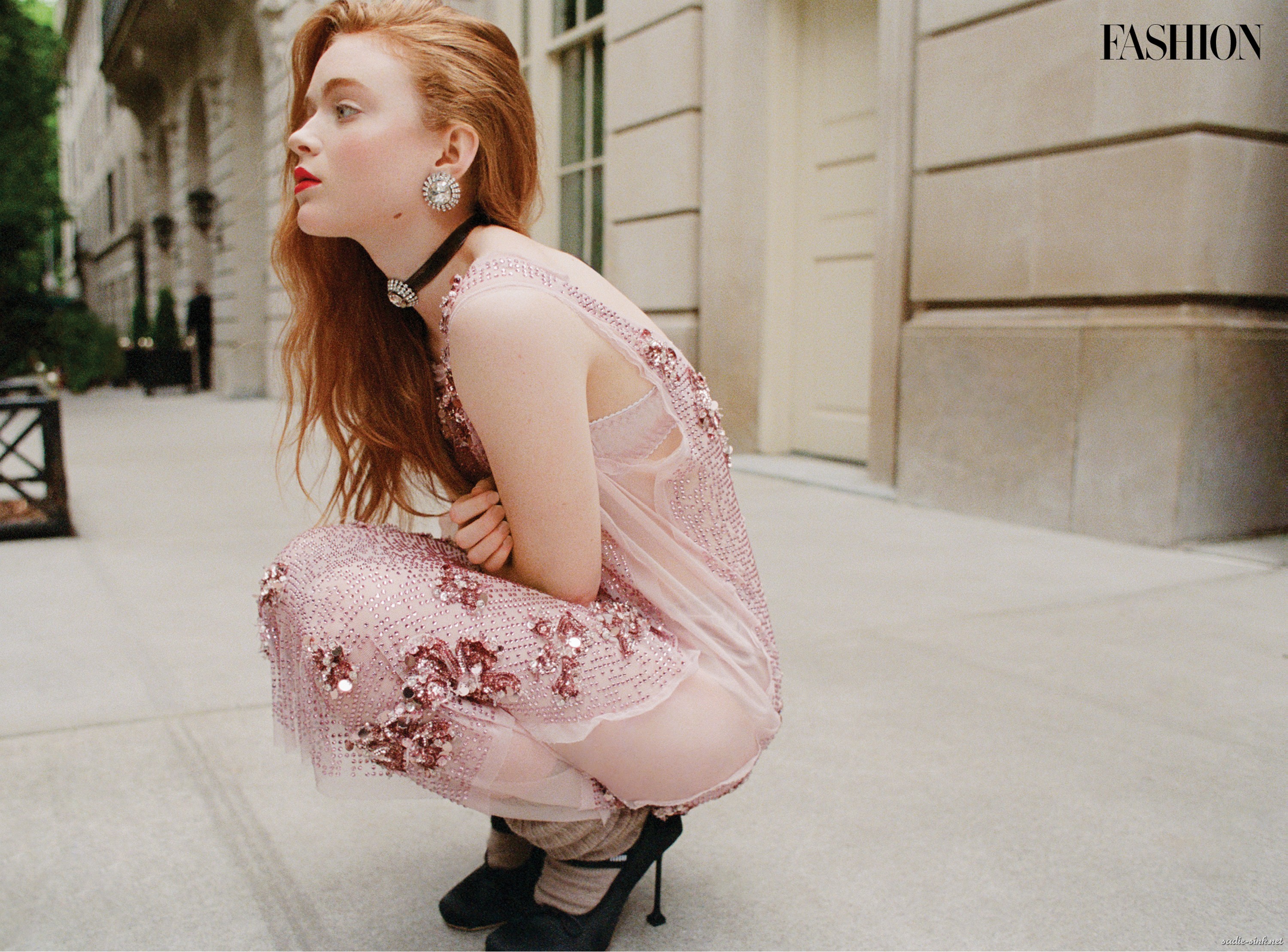 Thanks to “Stranger Things,” Sink spent most of her teen years in the spotlight. But underneath all the glitz and glam, she’s just your average 20-year-old who prefers baggy jeans to ball gowns.

Don’t get Sadie Sink started on High School Musical. “You just say the word and I can sing all the lyrics of ‘I Want It All’ from the third movie,” she laughs, describing her love of the iconic Disney Channel franchise and the characters Ryan and Sharpay Evans, played by Lucas Grabeel and Ashley Tisdale. “They are NOT the villains!” she passionately declares, only half joking. (For the uninitiated, she’s referring to the first film, in which the Evans siblings try to prevent Vanessa Hudgens’s Gabriella Montez and Zac Efron’s Troy Bolton from auditioning for the school musical.) “Sharpay put in the work! Where is the respect for seniority? But I could talk about this for hours.”

In fact, we’re only five minutes into our video chat, but here we are, already gossiping, grinning and giggling like two girls at a slumber party. She’s even dressed for one, wearing a relaxed striped shirt with a messy bun and barely-there makeup as she sits cross-legged on a chair in an L.A. hotel room. And maybe it’s her young age of 20, or maybe it’s because I’ve caught Sink in a lull after a whirlwind of press for season four of Stranger Things, but our conversation feels more intimate than most. This, I soon discover, is rare for the usually guarded actor.

Growing up in Brenham, Tex., Sadie Sink and her four siblings — three brothers and one sister — weren’t allowed to watch many movies, but one that they were able to enjoy was High School Musical (hence the obsession). “It really had a huge impact on me and started me and my brother Mitchell on our musical journey,” she shares. Case in point: The Sink siblings would make up their own choreography to various songs from the film and (in her words) force their family to watch them perform it. With two such fervent musical fans in the house, their parents enrolled both Sink and her brother in local singing, acting and dancing classes, which led them to get roles at a regional theatre in Houston. “My mom drove us to all these things — not in the hope of our ever going to Broadway or anything like that but because they were activities we loved doing.”

As luck would have it, that’s exactly what happened next. Sink was playing the titular role in a local production of Annie when she learned that Broadway was looking for its own red-headed protagonist. After submitting an audition tape, Sink was initially cast as an understudy, but a few months later, she became the star. She was 11 years old at the time. By 12, she was starring in The Audience (written by The Crown’s Peter Morgan) alongside Helen Mirren. “That’s when my relationship with acting changed,” notes Sink. “Working with some of the greatest minds in the industry taught me about what acting really is, and that’s when I decided this was what I wanted to do.”

With that in mind, Sadie Sink began a natural transition from stage to screen. After moving to New Jersey with her family, she landed a few guest spots on TV series like The Americans and Unbreakable Kimmy Schmidt. But it wasn’t until she auditioned for season two of Stranger Things that her world completely changed. Although the casting directors were initially hesitant about Sink’s “old” age (she was 14 at the time!), she wouldn’t take no for an answer. “I just begged and pleaded with them to give me more material so I could show them something fresh,” she explains, describing how “right” the part of Max felt to her. The producers relented and called her in for a chemistry read with now co-stars Gaten Matarazzo and Caleb McLaughlin. The next day, she found out she’d got the part.

With the fifth and final season of Stranger Things on its way, Sink isn’t sure if she has become more or less like her character, but she admits that they both tend to put up walls. “Max’s walls look very different from mine,” she says. “I don’t think I’m as cold as she is, but I can sometimes be slightly emotionally unavailable.” It then dawns on me that I’ve been seeing a slightly less guarded Sadie Sink on my screen — one who is quick to share stories and laugh at her situation and herself. However, she’s still careful with her words — and who could blame her? After watching the media devour other famous young females — like Britney Spears, Taylor Swift and even her co-star Millie Bobby Brown — Sink is smart to be cautious.

Speaking of Swift, Sink’s opportunity to work with the singer-songwriter on All Too Well: The Short Film in 2021 couldn’t have come at a better time. “I’m so grateful that she was able to give me such good advice in terms of navigating the industry as a young woman and about life in general,” Sink says, smiling. What exactly did Swift share? Well, that’s a secret Sink keeps to herself, although it’s clear from her expression that her friendship with Swift is special and full of mutual admiration. (Swift reportedly personally chose Sink for the role.) “As a director, she’s just as amazing as you’d think she would be,” Sink explains enthusiastically. “She is a powerhouse and can do anything she puts her mind to.”

Looking back, Sink is still processing her teen years spent in the spotlight. “It’s such a weird and specific situation that the Strangers Things cast and I are all in because the world knows who our characters are but we’re still trying to figure out who we are as people,” she says thoughtfully. “I think being in the industry accelerates you and you mature faster. But for the most part, it’s just so fun because the cast is all going through it together.”

To get her “typical teen fix,” Sink reveals she’d often condense multiple experiences, such as a high-school party or a late-night diner run, into one weekend and treat them like checking off boxes on a to-do list. But the one that got away? Living her High School Musical fantasy. “I would’ve absolutely loved to have been in a school production with kids my age,” she says wistfully.

Although most people would happily trade homemade costumes for red-carpet couture, Sink admits she feels more comfortable in baggy jeans and a tank top than a bourgeois ball gown. “In a way, the clothing I wear in my personal life feels like a type of armour,” she shares, referring to the powerful suiting and edgy separates she’s been rocking recently. “I feel more like myself when I’m not dressed up.” That said, her love of blazers transcends both celebrity and real-life Sadie. “I will wear them until the day I die,” she laughs.

That’s the thing with Sadie Sink. As much as she is focused on continuing to build her career, with the 2021 horror franchise Fear Street, the final season of Stranger Things and Darren Aronofsky’s upcoming psychological drama The Whale (to be released later this year) and attempting to navigate a complicated relationship with the fame that follows, she’s still just a young woman trying to find herself as she graduates from her teens into her 20s. Whether she’s taking her cues from a grown-up Taylor Swift or the fictional and fabulous Sharpay, or a little bit of both, it’s clear that Sadie Sink will be calling the shots. And that’s exactly how it should be. “Honestly, my life has felt a bit like a coming-of-age movie,” she reveals. We’ll be here, waiting for the sequel.